The Agile Approach, Process and Models 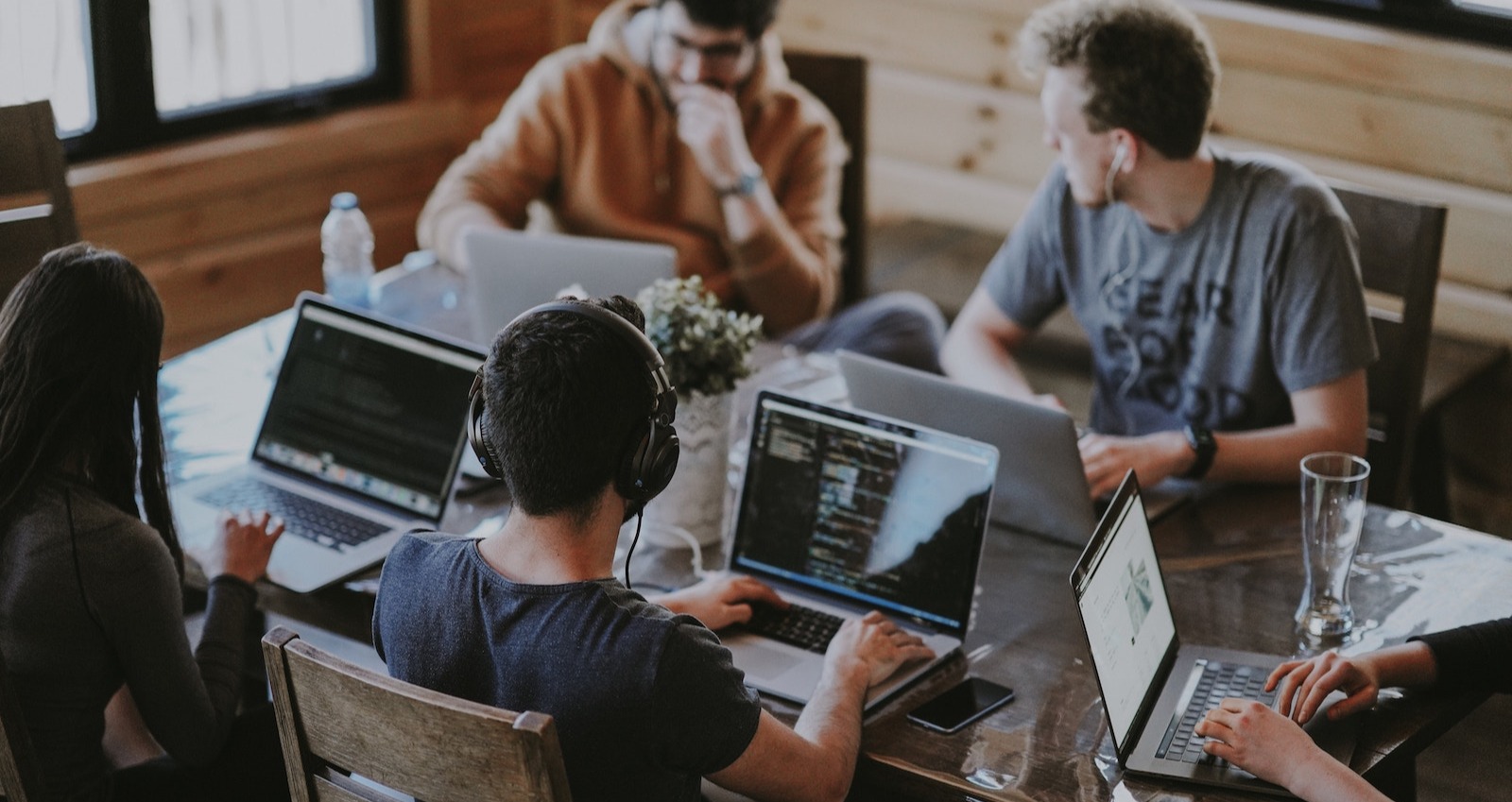 "I promise not to exclude from consideration any idea based on its source, but to consider ideas across schools and heritages in order to find the ones that best suit the current situation."

The Oath of Non-Allegiance

An agile approach focuses on empowered, self-managing teams; autonomy that doesn't need day-to-day intervention by management. Instead, Agile management means protecting the team from outside interference and removing roadblocks that impede the delivery of business value and productivity.

What Does It Mean to “Be Agile?”

It's not about doing one practice (such as Kanban or Scrum) and declaring that you are Agile, it's about continually seeking better ways of achieving organizational goals.

Your company must adopt an agile culture and implement practices based on the needs of your teams and projects.

Why do businesses implement agile? Since 2007, VersionOne has conducted yearly surveys on the state of agile across industries and the globe to uncover the value.

Consistently the top reasons why companies and organizations adopt agile are to:

The top benefits realized are the ability to: 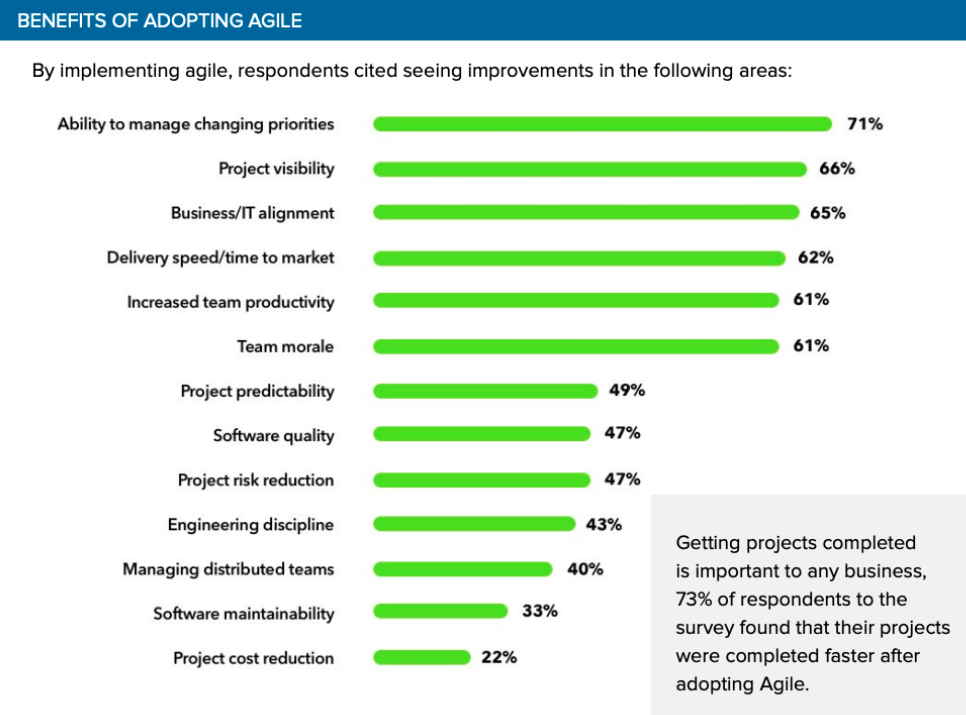 The challenges and barriers to adopting and scaling agile are almost always cultural. You may find resistance to change, inconsistencies in process and practices, and lack of skills and experience with agile methods. This is common but can be overcome with practice and embracing a continuous improvement mindset. 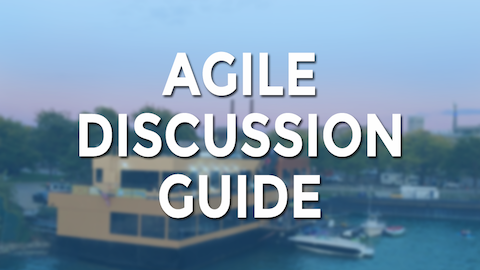 This article is part of our Agile Discussion Guide, which is designed to get the agile conversation started at your organization. Click to download the PDF.

Agile is about fostering collaboration and communication, while Lean is about eliminating waste and focusing on delivering the most value at just the right time.

The term lean came out of lean manufacturing with the model Toyota Production System pioneered to streamline production and improve delivery. Mary and Tom Poppendieck correlated how Lean principles drive software development in their seminal book Lean Software Development: An Agile Toolkit. Those driving principles are:

In 2011, Eric Reis took these concepts a step further with The Lean Startup, which emphasized tight feedback loops to learn and adapt as quickly as possible. The phases of the feedback loop are build, measure, and learn. More and more development teams are folding Lean Startup into the way they practice. 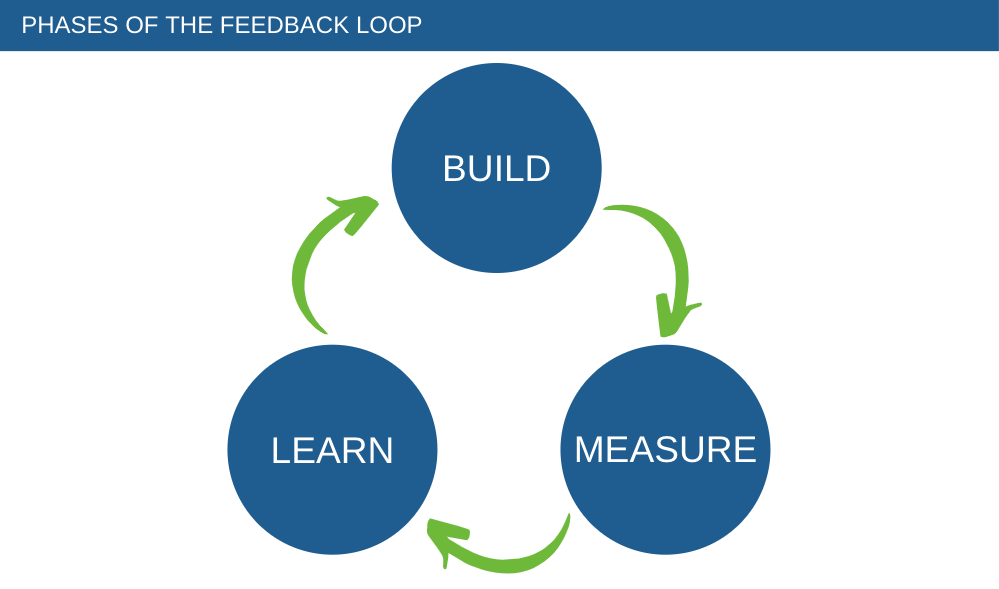 Driving outcomes using lean-agile is a “team sport” and it encourages exploration to find better ways of working together.

Agile is not a set process or system, but a set of principles and values. But when it comes to acting out the agile approach, the best model depends on the unique goals and problems of your organization and team.

There are several popular models of agile, including:

All have a common solution for improving the outcomes of software development through unique concepts.

How to Select the Right Agile Model

Consider specific circumstances to figure out what might be the best fit for each situation:

Translating to mean “signboard” or “billboard”, Kanban is a visual scheduling system that helps a team determine what to produce, when to produce it, and how much to produce.

When a temporary surplus in capacity occurs, give precedence to helping other team members complete any work already in progress, before taking on new tasks/cards.

Scrum is an agile project management model that consists of small teams working interdependently. The teams work together, but focus on their own tasks and must be capable of self management and decision-making.

Scrum is based around a “sprint,” which is generally a 1-4 week period for delivering a working part of the system. At the end of a sprint the results are delivered, then reviewed, and the next sprint is started.

The cycle repeats until there are no more story cards to be played in the product backlog, budget is unavailable, or the deadline has passed. Using the scrum process ensures that the most valuable parts of the product are built first.

Agile development aims to break down the silos between requirements analysis, testing and development. Deployment, operations and maintenance are other activities that suffer a similar separation from the rest of the software development process. The DevOps movement is aimed at removing these silos, encouraging continuous improvement at all levels, and leveraging automation to work smarter, not harder.

The essential aspects of DevOps covered below are:

We are not perfect, and technology is constantly changing. Part of changing your culture is improving yourself, your team, your processes and your organization. Since failure is inevitable, it’s important to set your team up to be able to absorb the failure, recover quickly and then learn from it. With DevOps, failure isn’t always a negative thing, it’s a learning experience.

High performing teams assume things are going to hit the fan here and there, so they build for fast detection and rapid recovery.

Once that foundation is in place, the following concepts—having a Just Culture and holding blame aware postmortems—further promote an environment of continuous improvement.

Just culture makes an effort to balance safety and accountability. Additionally, hold blame aware potmortems as part of incident response. These help to actively foster an environment that accepts the realities of the human brain and creates a space to acknowledge blame in a healthy way. Also referred to as Actionable Retrospectives, they collectively acknowledge the human tendency to blame, they allow for a productive form of its expression, and they constantly refocus the postmortem's attention past it. Look for waste and opportunities to improve your processes (continuous improvement and the postmortem philosophy are core tenets of Google’s Site Reliability Engineers).

Continuous delivery reduces the risk of release and leads to more reliable and resilient systems. This is achieved through automation of the build, deploy, test and release process, which reduces the cost of performing these activities, allowing us to perform them on demand rather than on a scheduled interval. This, in turn, enables effective collaboration between developers, testers, and operations.

Recommended reading: How to Succeed with Continuous Improvement: A Primer for Becoming the Best in the World, By Joakim Ahlstrom

An essential part of continuous delivery is being able to manage infrastructure in an automated fashion. Organizations looking for faster deployments should treat infrastructure like software: as code that can be managed with the same processes software developers use. These let you make infrastructure changes more rapidly, safely and reliably.

IaC ensures that all infrastructure environments are setup the same. It cann be used on bare metal, virtual machines and on cloud infrastructure. Many tools out there to facilitate this, including Ansible, Puppet, Chef, SaltStack and more.

As we become a more connected society and our reliance on the Internet grows exponentially, the threat of security breaches only increases. We need to stop doing security reviews at the end of our development cycles and instead bring security professionals into the cross-functional teams we are building.

Start with the following:

Learn that security is a context bound job with behavioral analysis and forensics as a foundation.

DevOps can not succeed if it requires a large number of test cases to be run manually. Since we are only human, we make mistakes no matter how hard we try. Testing automation not only encompases running unit tests as part of a continuous integration system, but also includes acceptance tests (also called behavior driven development), integration tests and regression tests.

The value of testing automation:

A Story Card is the unit of each deliverable for an agile team. Story cards include a sentence or two describing a needed function. Rather than representing detailed requirements, story cards are a “placeholder for a conversation.” Each card is testable, includes acceptance criteria, ad the details are elaborated upon via conversation between the customer, and the delivery team.

How to Write Story Cards

How to Take Story Cards to the Next Level

Estimating and Sizing are techniques for evaluating the size and complexity of delivering features in order to facilitate planning and guide investment decisions. A good planning process based on a reliable estimation and sizing approach:

Tips of Effective Estimation and Sizing

Pro Tip: Measure and account for “Card Growth” between planning and delivery (e.g. 1 card in the backlog may turn into, on average, 1.25 cards delivered, due to some fraction of the cards being able to be decomposed into smaller slices when we discuss them in detail with the product owner).

A Sprint / Iteration is a set period of time for measuring a development team's throughput. Sprints/Iterations are one to two weeks in length with shorter iterations being the goal.

How Sprints and Iterations Work

Customer Collaboration is the practice of including your customer throughout development. Only the customer can tell you what they want, and collaboration allows you to listen to their needs instead of guessing at what they need.

The customer drives the requirements, prioritization, and review of work. While it is not always possible to have customers on site, you must make interaction with them a priority.

Agile is not about a single process, but a cultural transformation. Take the first step to greater organizational communication, collaboration, efficiency and results by taking advantage of one of the following resources: